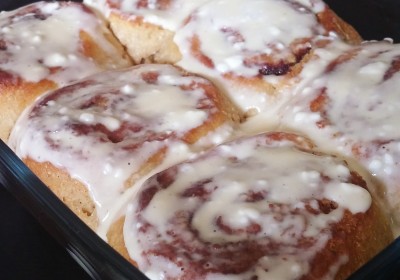 Whether you’re enjoying them as an afternoon treat or as part of a weekend breakfast, these keto cinnamon rolls will blow your mind. They’re soft, chewy, fluffy and utterly delicious… yet without all the carbs and sugar of regular cinnamon rolls.

This recipe works best with pre-shredded mozzarella from the supermarket. Fresh white  mozzarella contains too much liquid and is too runny.

The dough is a bit tricky to work with. Do oil your hands if you find it too sticky. If it cools down too much, just warm it back up to make it easier to handle.

Don’t be fooled by the size of the rolls – they may be small, but are quite filling! If you have it, use a brown sugar alternative to make the filling – it has a taste very similar to brown sugar and works great with cinnamon.

You can use butter instead of the water, which gives the rolls a nice buttery taste. I made a few using butter, then decided to just dissolve the sweetener in water as the rolls are very high in fat already. The choice is yours!

If you do not have vanilla-flavoured stevia, you could add a bit of vanilla extract to your frosting.

If you don’t have extra fine almond flour and are using almond meal or ground almonds, add an additional 2 tbsp of almond meal/ground almonds or 1 tbsp of coconut flour.